Today, I am pleased to host Zoe Cannon and her book The Torturer's Daughter.

Peep Rep: Are you really pleased? Or are you just saying that so her dad won't torture you?

Liza: Ha! Shows how much you know. The torturer is her mom. 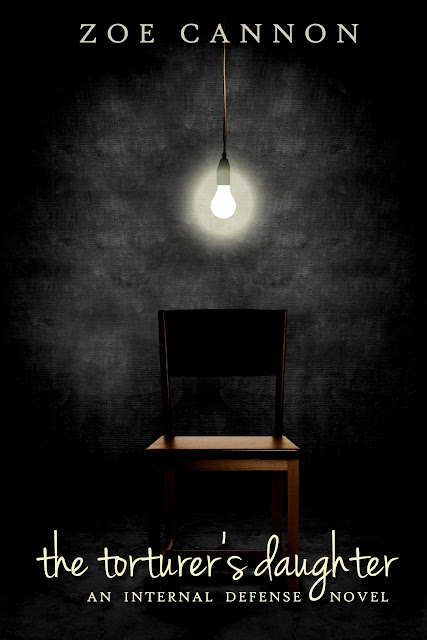 When her best friend Heather calls in the middle of the night, Becca Dalcourt assumes it's the usual drama. Wrong. Heather's parents have been arrested as dissidents - and Becca's mother, the dystopian regime's most infamous torturer, has already executed them for their crimes against the state.

To stop Heather from getting herself killed trying to prove her parents' innocence, Becca hunts for proof of their guilt. She doesn't expect to find evidence that leaves her questioning everything she thought she knew about the dissidents... and about her mother.

When she risks her life to save a dissident, she learns her mother isn't the only one with secrets - and the plot she uncovers will threaten the lives of the people she loves most. For Becca, it's no longer just a choice between risking execution and ignoring the regime's crimes; she has to decide whose life to save and whose to sacrifice.

It's easy to be a hero when you can save the world, but what about when all you can do is choose how you live in it? THE TORTURER'S DAUGHTER is a story about ordinary life amidst the realities of living under an oppressive regime... and the extraordinary courage it takes to do what's right in a world gone wrong.

Peep Rep: Oh that does sound good! Can we get this?

Liza: Great News on that front:

TORTURER'S DAUGHTER IS ON SALE FOR
99 CENTS ON DEC 27TH.

Buy Links:
Amazon I Barnes & Noble I Kobo I Smashwords

Peep Rep: 99 cents! Even you can afford that.
I found an excerpt. Don't talk while I'm reading.

Becca’s steps slowed as she approached Processing 117. The floodlights of the parking lot shone down on her, exposing her. Past the lot, the darkness threatened to close in. There was no other source of light nearby except for the dim glow of the streetlamps, nothing but trees for at least a mile in every direction.

The concrete structure loomed taller than its five stories—maybe because of the invisible presence of the underground levels, or maybe because in a moment Becca was going to have to walk inside.
Heather can’t have been arrested. If she were a prisoner, they wouldn’t have let her call.
But when Becca remembered the panic in Heather’s voice, the thought wasn’t all that reassuring anymore.

Becca took the last few steps across the not-quite-empty parking lot. The windows of the upper floors glowed in a patchwork of lights, showing who was working another late night and who was at home sleeping… or down on the underground levels.

Becca knew that in one of those dark offices, a phone had been ringing off the hook for the past half-hour, its owner oblivious to Becca’s pleas for her to answer, to find Heather for her, to fix this.
Becca reached the double doors of the entrance—and froze. Her heart thudded against her ribcage.
Heather is in there, she reminded herself. Heather needs me.

She pulled the doors open and stepped inside.
The doors slammed shut behind her, the noise echoing off the stark white walls. Security cameras stared down at her from the ceiling. The guards, one to either side of the metal detector, pinned her to the floor with their eyes, but said nothing.

Opposite the metal detector from Becca, the room was bare except for a huge metal desk with corners that looked sharp enough to cut. Behind the desk, a dark-haired woman with a headset clipped to her ear stopped mid-yawn and jerked up to face her.
Becca held her breath and stepped through the metal detector. Its light flashed green, and one of the guards waved her forward. She let her breath out and stepped up to the desk.

She eyed the woman’s crisp gray suit, and the desk that gleamed like it had never seen a speck of dust in its life. Then she looked down at her own clothes, the jeans and wrinkled t-shirt she had grabbed from her dresser after hanging up with Heather. She crossed her arms around her stomach.
The receptionist’s bleary surprise had vanished, replaced by a stone mask. “Can I help you?”

“I’m looking for…” Becca bit back the name on her lips. No. If she were in her office, she would have answered the phone. Anyway, Becca could imagine her reaction at finding out about this midnight walk to 117. Becca was on her own.
“…Heather Thomas,” she finished. “She called me half an hour ago and told me she was here.”

Which led Becca back to the question that had been circling through her mind since she had gotten Heather’s call. What was Heather doing here?
The receptionist turned away and tapped something out on her keyboard. It only took her a few seconds to find what she was looking for. She typed in something else and touched her earpiece. “We have a detainee in temporary holding,” she said to someone Becca couldn’t see. “Last name Thomas. Her file says she’s waiting for a relative to collect her. Right, that’s the one. Someone forgot to collect her phone, and she called a friend.” A pause. “No, that won’t be necessary. Just confiscate the phone.”

She turned back to Becca. “Heather Thomas is waiting for her guardian to arrive. Are you Lydia Thomas?” She gave Becca a skeptical once-over.
Becca considered saying yes, but even if the receptionist weren’t going to ask for proof, there was no way she could pass as Heather’s… aunt, she remembered after a moment. Aunt Lydia, the one who always looked at Becca and Heather like being in high school was catching.

The receptionist took her silence as an answer. “I’m going to have to ask you to leave.”

Becca wanted nothing more than to do just that. But she couldn’t leave and let this place swallow Heather. “If she’s waiting for her aunt to get here, I can wait with her until she shows up.”

“I’m sorry,” said the receptionist, already turning back to her computer. “The policy is clear. The detainee will remain in temporary holding—alone—until her guardian arrives.”

Becca was losing ground. And somewhere in this building, Heather was waiting for her. “I’m not trying to take her home or anything. I only want to…” To make sure she wasn’t locked away underground. To make sure they hadn’t gotten her mixed up with somebody else, some dissident slated for execution. “…to let her know I’m here. I promised her I’d—”

“Your refusal to leave the building when instructed will be recorded.” The receptionist placed her hands on her keyboard. “May I have your name?”

“At least tell me what happened. Why is she here? Is she all right?”

“Your name, please,” the receptionist repeated.

If she stayed much longer, the receptionist would order the guards to drag her out—or worse, in. She could end up in one of those underground cells… She shivered. They couldn’t do that to her just for asking about Heather, right?

“Your name,” the receptionist repeated again, with a glance toward the guards.

“Well,” she said, her voice suddenly warmer, “I suppose we can make an exception.”

Peep Rep: Oh I definitely have to read this.

Peep Rep: Okay, but I get to read it first.

About the Author:
Zoe Cannon writes about the things that fascinate her: outsiders, societies no sane person would want to live in, questions with no easy answers, and the inner workings of the mind. If she couldn't be a writer, she would probably be a psychologist, a penniless philosopher, or a hermit in a cave somewhere. While she'll read anything that isn't nailed down, she considers herself a YA reader and writer at heart. She lives in New Hampshire with her husband and a giant teddy bear of a dog, and spends entirely too much time on the internet.