Today I have Carysa Locke over to share her space pirates novel: Pirate Nemesis.

I had sent Carysa three questions to answer but she had evidently been kidnapped by pirates and could not respond. However, late last evening I received their ransom note...thus explaining the white strips. That's always a sign of pirates... At least they didn't ask me for money, and they responded with what may or may not be Carysa's answers.

1) What type of pirates are your pirates?
Sexy and dangerous!

2) Do they have any special talents?
SO many! They have psychic gifts, like telepathy, telekinesis, and killing.


In the real world? Jack Sparrow is a favorite. In my books, it's really hard to choose just one. But I do have a soft spot for Cannon, my pirate king. 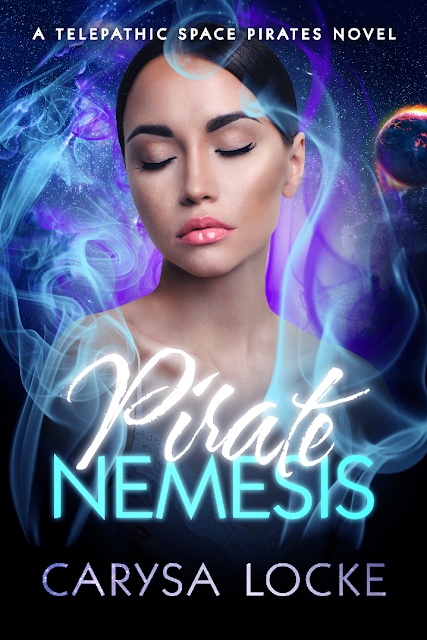 Mercy Kincaid is a fugitive from her own family. Her dangerous telepathic gifts make her a target. So is anyone she gets close to. When her best friend is captured and tortured, Mercy’s only hope is to reunite with the family that tried to murder her as a child. She trusts few among her blood relatives, but finds herself intrigued by an enigmatic and dangerous killer.

Reaper has spent a lifetime watching his people die. He's vowed to kill anyone who jeopardizes their survival. Mercy’s gifts are the biggest threat they’ve faced in eleven years, since a biological weapon nearly annihilated the pirate colonies. But Reaper realizes her talents can either destroy them, or save them. He must decide if he’s fallen victim to her power, or if he can truly trust the beautiful woman and her compelling abilities. If he makes the wrong choice, everyone dies.

Reaper studied her face.
Are you rethinking your choice? There are others on this ship who could teach you. People who are not like me.
She probably should have stopped to seriously consider his words, but Mercy found herself smiling wryly. Now that she’d made the jump, her fear faded.
“They’re pirates. Are you telling me these people aren’t violent? That they have never killed anyone?”
No. He looked at her. But it is different for them.
“Maybe. Maybe not.” She lengthened her stride to keep up with him as they walked. “Look, nothing has changed. Out of everyone on this ship, you’ve had ample opportunity to kill me, if that’s what you wanted to do. You haven’t, so I believe that makes you the safest person for me to be around right now.” She paused, then shrugged. “Safer than family, anyway.”
He gave her an odd look, and stopped beside a door.
“What?” she asked.
No one has ever called me “safe” before.
Mercy met his gaze for a long moment before answering. “I’ve spent my entire life running from things. When I was four, I had nightmares about my grandmother trying to kill me. I used to look at every stranger as a potential threat. When you live like that, you learn pretty quickly not to let fear control you. I can be hyper-aware of danger without giving in to being afraid.” She switched to speaking telepathically. What you are is frightening, but I’m used to viewing everyone that way. You have control of it. That control makes you safe.
Reaper smiled, and Mercy caught her breath. He was a striking man, with hard, masculine features and pale blue eyes that seemed to hit her with adrenaline every time he looked at her. But the smile softened his face and added a hint of warmth that made him suddenly approachable. It took striking features and made them compelling. She had the sudden, irrational urge to lean into him, to reach out and touch him. Watching his mouth, she found herself wondering what it would be like to kiss him. His smile widened as he watched her, and Mercy remembered that he could hear every thought.
Don’t let it go to your head, she told him, ignoring the way her face heated. I just spent weeks thinking I was a dead woman. It’s natural to think of sex after coming back from the brink of death.
Were you thinking of sex? Reaper shocked her by reaching out and taking her hand. The second his fingers brushed her skin, her stomach tightened, and warmth bloomed down the back of her hand, seeming to spread over her entire body in an instant. He pressed her fingers to the door panel. I thought it was just a kiss.
He dropped her hand as the door slid open, and Mercy cradled it against her like it was burned. She glared at him.
“Don’t look so smug. It isn’t attractive.”
He laughed softly, and it was a startling sound coming from someone who usually showed very little emotion. “Liar.”

Carysa Locke is the pseudonym for writing team Carysa Locke and MaLea Holt, two best friends who have been creating imaginary worlds together for more than twenty years. Carysa is a high school English teacher, and MaLea helps support families with special needs children. You might say, they work as super heroes in their day jobs!