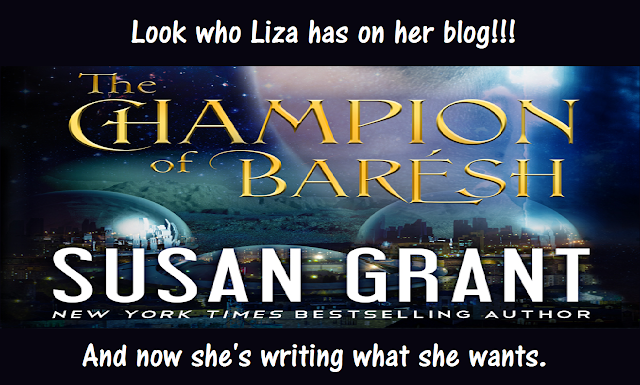 Hey, everyone! I want to thank Liza for inviting me here today. The SF Romance community is a tight one, yet it’s grown so much since I first started writing SFR back in 1999 with my Star series. This makes me so happy. There are so many books now, so many authors to try. It wasn’t always this way. After leaving traditional publishing almost 6 years ago after more than a decade, I wasn’t sure when (or even if) I’d publish another book. I love writing, but I either wanted to be able to tell stories my way, without so many rules and restrictions, or I would not publish at all.

Then, last fall, I learned that being an indie author was a real thing, and everything changed. To quote Jemm Aves from The Champion of Barésh: “In my wildest dreams I couldn't have imagined a place like this. I feel like I've been caged all my life and now I'm finally free.”

I was born a storyteller and will always be a story teller. Now I can finally write the stories of my heart for publication the way I want to write them. Many readers have messaged me faithfully over the years, asking when I would write again, telling me that you missed my books. I actually dedicated “Champ” to one reader whose notes helped push me back to the keyboard. But, The Champion of Barésh is dedicated to everyone who enjoyed my books—and missed them.

A bit about why I wrote “Champ”— Instead of a Star book #4 (which it is), I decided to begin a new series called Star World Frontier. It’s been so long since the Star Series books were released (16-18 years!) that this seemed best. Star World Frontier books will center on the far-flung, wild and woolly planets of the galactic frontier, which also happens to be Earth’s neighborhood. This world felt so real to me that I created created a space-tourism travel guide for the worlds I write about in my books. http://www.susangrant.com/books/star-world-frontier-series/the-lonely-galaxy-travel-guide/

I’m glad I had this chance to introduce myself. (thanks, Liza!). Because after so long it’s like starting over. I hope you will discover stories you love in my books. 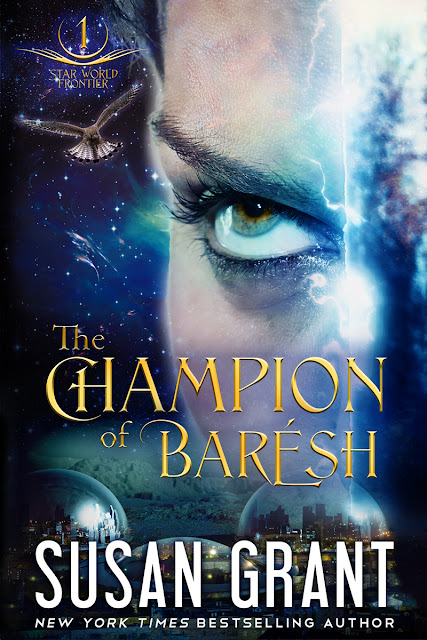 She was playing with fire…

Jemm Aves battles to keep her dreams alive on a dead-end world. Working for the mines by day, she’s a successful bajha player at night, disguised as a male to be allowed to compete in the colony’s dangerous underworld where club owners will go to extremes to retain the best players. Every win puts her one small step closer to her goal: saving enough to escape Barésh with her family. When a nobleman from one of the galaxy’s elite families recruits her to be a star player for his team, it’s because he doesn’t know her secret. Her ruse proves to be her most perilous game yet when it puts both their lives—and her heart—at risk.

Prince Charming he was not…

Prince Klark is eager to reverse his reputation as the black sheep of the Vedla clan, a family as famous for its wealth and power as it is for being a bastion of male-dominated tradition. If his bajha team can win the galactic title, it would go a long way toward restoring the family honor that his misdeeds tarnished. He travels to Barésh to track down an amateur who’s risen to the top of the seedy world of street bajha, offering the commoner a chance of a lifetime: a way off that reeking space rock for good. But his new player comes with a scandalous secret that turns his plans and his beliefs upside down. He sets out to win a very different prize—his champion’s reluctant heart.

RITA-winner Susan Grant is back with an all-new, stand-alone tale of two improbable lovers, their daring secret, and the gamble destined to alter the course of their worlds forever.

“Don’t say nothing,” Nico warned. “Nothing at all.”

Jemm’s pulse boomed like the detonations of ore-charges. She let her hair spill forward to camouflage her face from the off-worlders. The crunch of several pairs of boots on grit came from only about twenty steps away. “Nico, glad to find you still here.” Even without a view of the voice’s owner, she knew that lovely brogue belonged to the Vash.

Her timepiece slid around her wrist she dragged her palms down Nico’s sweater and pretended to nuzzle the side of his neck. “Cut me loose before they get too close,” she whispered. “Make it believable, or we’re done for.”

He nodded. “Run along now, darlin’! I’ve got business to attend to.” He moved her backward and gave her a pat on the bottom for good measure.

She used a flirtatious hair toss to keep her face hidden before she turned her back to the off-worlders and sashayed off, hoping they would act like men and fix their attention on her swaying rear-end instead of the fact they had not gotten a good look at her. She felt their gazes following her all the way to where she disappeared around the corner a half block away. She stopped there, her blood roaring in her ears. Craggin’ crat.
“Who was that?” she heard Skeet ask in an admiring tone.

Jemm? Was he crazy? “It takes some truth to make a lie believable,” went the saying. Her brother had taken that advice to heart.

“Kes has already gone home, fellas.” Nico herded Sir Vedla and the two pro players back to Narrow Margin’s back entrance. A group of drunken miners stumbled past behind Jemm, their loud conversation making it impossible to hear what was being said as the Vash stopped to hand something to Nico. Then goodbyes were said.

But before Sir Vedla made it back inside the club a sex server stopped him. Her hands were all over him as she tried to separate him from his companions. Despite the weak light, the contrast between this aristocrat from the stars and the thin, dirty, scantily dressed young woman curling around him like oily hallucivape smoke was obvious.

Breathless, Nico careened around the corner. “Crag me. That was close,” he said.

“Too close.” Jemm peeked around the corner again. Despite how far the sex worker was beneath Sir Vedla’s lofty station, he refused her advances without visible disgust or disrespect. It took two tries before he was able to disentangle himself from her and disappear with his players inside, leaving the girl to gaze after him in awe.

Then it hit Jemm that she was standing there doing exactly the same thing.

Want to Read Another Excerpt: Check out this one.

Susan Grant is a New York Times bestselling and RITA-winning author who enjoys being able to indulge her love of travel and adventure by piloting jumbo jets around the globe. Her careers as a commercial pilot and air force pilot have provided endless inspiration for her books. Her new series debuted in 2016 with The Champion of Barésh. It's her first book as an indie author.

Love to arm-chair travel? Sit down, strap in, and visit Susan's Come Fly With Me blog at her website: susangrant.com.