Today, I have Rosalie Redd over to share her book: Unforgettable Lover.

Warning: If you stare at this fellow too long, you will never be satisfied with a normal human ever again. 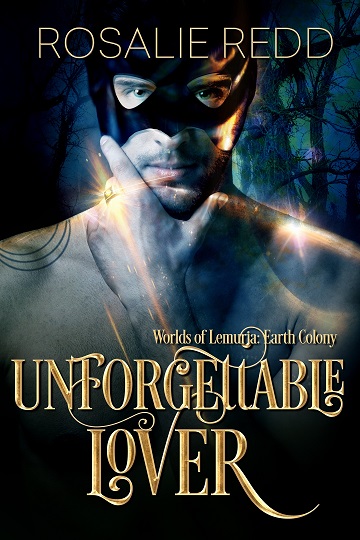 The Betram ritual, when the full moon occurs on the summer solstice, is a sexual rite—and a requirement—for all unbonded Stiyaha of age. The irresistible urge to mate drives their inner beasts. Some succumb and transform, while others hide behind masks. None can escape the compelling need.

For Leonna, Betram offers one night of freedom from a destiny she doesn’t want. Eager to participate, she’s drawn to a formidable male whose tenderness burrows into her soul. Despite discovering she’s below his status, she is caught up in their passionate frenzy, and loses her heart to a male she can never have.

Though reluctant, as an unbonded male, Prince Nicholai must participate in the Betram ritual. Because he fears harming anyone he gets close to, he dons his mask and vows to stay in human form. What he doesn’t expect is the intensity of his hunger for a certain honeyed female hidden behind a disguise. As much as he longs to forget her, he can’t, for she’s unforgettable.

As they raced through the trees, Nicholai caught glimpses of her fine figure. A dark short sleeved shirt fitted her body, accentuating her firm breasts. Long, elegant legs couldn’t hide beneath the short skirt that accentuated her hips. Black gloves covered her hands, extending mid-way up her forearms. Each time he spotted her, he learned more about the female he pursued. She intrigued him, and he intensified the hunt.
He closed the distance in a matter of moments. The excitement of the chase and the thrill of the catch were like a drug in his system. He craved more.
As he took her down, he expected softness and curves. Instead, her delicate skin covered a muscular build that took him by surprise. His beast responded, eager to couple with this strong, virile female. At the last moment he spun, using his own body to cushion their fall.
Ahhhh. Her cry rang in his ears and burrowed down into his soul. A sense of masculine pride and possessiveness filled his chest, a need so raw he couldn’t deny its power over him. A thin veil of red blurred his vision, the power of the full moon on the summer solstice taking its toll on his psyche.
The spongy earth, covered in moss and small bits of grass, provided the perfect blanket of softness. Cradling her in his arms as he lay on his back, he gazed upon her masked face for the first time.
Vibrant blue eyes encased with long lashes stared back at him through the holes in her disguise. High cheekbones, flushed from her exertion, were visible beneath the edge of her mask. Although her nose was hidden behind the tip of the material, ruby red lips provided enough details to spark his imagination.

What a delightful  love story!

The author has created a fabulous world with characters that would not let me put the book down, so now I am in danger of starving to death. But what a way to go!

Leonna meets Nicholas during the Betram ritual in which all none betrothed adults must attend. While the populace remains in human form most of the time, on Betram the beast within this race of humans will take over and find a mate for the night.

Neither Leonna nor Nicholas had looked forward to this ritual and both planned to remain in human form. That is until they scented each other.

Neither can deny the love that consumes them. But there are several problems for any future between them:
1)     They wore disguises, so they no clue how to find each other.
2)     Nicholas is the king's first son.
3)     Leonna is from the merchant class.
4)     And there is an evil second brother who wants to be king.

You won’t be able to put this book down until all those matters are resolved.

Happy to give this 5 stars!

After finishing a rewarding career in finance and accounting, it was time for Rosalie Redd to put away the spreadsheets and take out the word processor. She writes Fantasy/Science Fiction Romance inspired by classics from the science fiction, fantasy, and horror genres layered with a good, hot dose of romance.
She lives in Oregon, where rain is just another excuse to keep writing. When not at her computer, you can find her at Jazzercise, waterfall collecting in the Pacific Northwest, or relaxing with her husband and their pesky cat, Snookums.