Nora Fleishcher shares her latest book: The Planets All Shone

A man and a woman who don't particularly like each other are forced to take a road trip together.  Maybe she's a little prissy, and he's a little unrefined.  Or maybe it's the other way around.  Maybe they don't particularly trust each other.  What's going to happen?  Ever since It Happened One Night, these stories have ended the same way: they fall in love.
(http://tvtropes.org/pmwiki/pmwiki.php/Main/RoadTripRomance)
So when I watched Captain America: Winter Soldier, and it did not end with Steve and Natasha liplocked and backlit by a California sunset, I thought it was about the best thing ever.
Winter Soldier got me interested in how you can use structures taken from romance to explore other kinds of relationships. 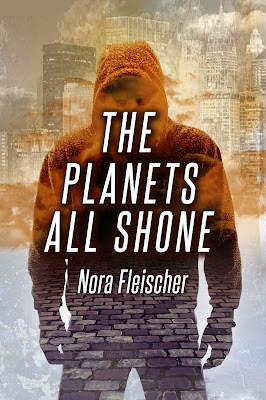 The Planet All Shone

My new novella, "The Planets All Shone," starts with two people who don't want to be stuck in a car together.  Dana Elson is a commercial artist who's running late for the presentation that will change her life; Adam Shapiro is escaping from the evil and secretive corporation he used to work for.  But then Dana accidentally swallows the "reboot" of Adam's late boyfriend, and the two are forced to help each other.


Wherever Dana and Adam are headed, it's not a romance.  But I hope it's just as much fun watching them tour some of the highlights of the great American road trip: Pike's Peak, the Grand Canyon, Las Vegas, and even Graceland (kind of).  And if people like their journey, I've got plenty of other destinations in mind!

This is a fast paced novel, with some new and funny concepts about how to host a dead person within you, in other words: time sharing etiquette for your living body. Basically, it falls to who is better equipped to handle the matter. The heroine, who is alive, mistakenly drinks something that is NOT her coffee. It had the consistency of Jello and tasted like rotting oysters. It was the rebooted coded information of a guy named Jay and now he’s inside her.  ERGO, the time sharing. To make matters even funnier, Jay has a boyfriend who insists upon accompanying her since she has Jay.

The three way conversations between two people with bodies is hysterical. The situation is brain damaging bizarre.

It left my head spinning, my mouth laughing, while I ponder how does Nora can even conceive such a story? Conclusion: She is one crazy author.