A Q&A by Arcadia Shield

Q - How would you describe the series?
A – Love wins against everything. It makes broken men heal, bitter women laugh, and damaged people use their last breath to save the things and people they love the most. It’s about the toughness of the human spirit, not giving up against something deadly and dangerous. The series is science fiction romance with a dose of dystopian sharpness and a dash of military might and muscle. There’s full on adventure and lots of romance - although not too steamy. The bonds of love, friendship, and family run through the books. Not just the brothers' bond but the deep bonds formed when people fight together in extreme adversity.

Q - Why did you write this series?

A – Heroes rising against impossible odds. Love, action, romance, all mixed up. Swoon! Science fiction opens new possibilities for forming unbreakable bonds between people fighting for their lives. I love the idea of a strong family, working together to protect themselves and fighting for something so much bigger; their soulmate and the planet.

Q - What order should I read them?

A - The books have stand-alone romances in them, but the action arc grows with each book. Characters from earlier stories appear in later books and it adds to the experience to read them in order. Here's that order: 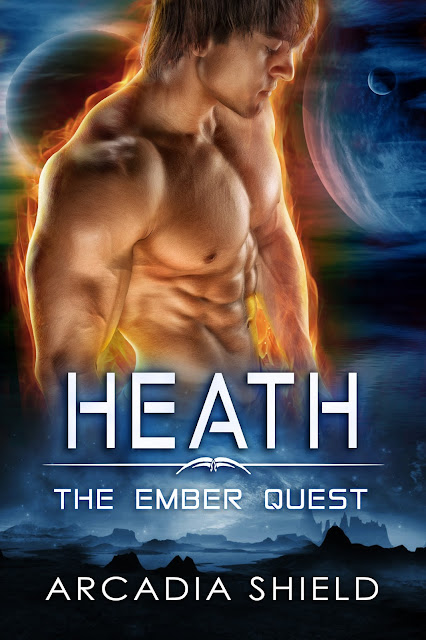 The Ember Quest series summary
When the world falls, heroes will rise and fight for truth, justice, and their hearts.
Overnight, a tyrannical, mysterious power takes control of the world. The State are ruthless and deadly. In the aftermath, the population is controlled by an unbending hypnotic suggestion that keeps people compliant. But some know the truth, and this group of resistance fighters won’t stop until the State are destroyed.

Heath – Book 1
In a world tipped on its head, Professor Annie Grimwald—a distinguished lecturer at Helstone University—is anxious. Her father, an eccentric dragon relic hunter, is missing. She’s tried everything to find him, and won’t rest until she's discovered what happened. In a moment of rashness, Annie contacts disgraced, brilliant, and gorgeous Heath Ember. Once a maverick, passionate lecturer, he's now ostracized and branded a criminal for arguing the State are a lie and an aberration who must be destroyed. But Annie is desperate, and Heath is someone she trusts. But at what cost?

When Heath and his brothers accept Annie’s plea, they find themselves in the brutal Badlands, infiltrating a state-run prison and discovering just how strange the world has become. Annie insists on going on this mission, determined to help her father and figure out why her memories conflict with the truth from the State. What do her flashes of memory containing dragons mean? And why does the State rule so fiercely against anyone who questions them?

Heath Ember is a fighter. He leads a group of stubborn, headstrong, brilliant warriors who fight to destroy the mysterious, deadly world leaders, restore the rightful powers, and protect the innocent. That includes his former colleague, the smart, and stubborn Annie, who makes him pause and wonder if there could be love among the ruins. Could there be hope in the dust, and a chance of happiness that seems like a distant, twisted memory? They find themselves fighting together and battling the State and their desire. Heath realizes love and Annie are the most important things. She ignites a fire in him he’s stamped on, and he never wants it to die. Whatever it takes, he will keep Annie safe.

“How much farther?” The sulphuric stench surrounding Heath Ember burned his nose. Although the smell conjured nightmares, he also found it strangely comforting. It meant he was close to his goal. Swiping sweat out of his eyes, he inched along the narrow underground passageway, his broad shoulders scraping the sides.
“You should be there.” The distorted voice of Jude, his younger brother, echoed through the remote comms link in Heath’s ear.
“You said that half a mile back.” Heath kept his voice low, knowing Jude could hear him. He doubted anyone else was in this foul-smelling tunnel, but couldn’t risk being discovered. He’d only just managed to squeeze down the narrow shaft that gave him access to this site, and that had meant leaving behind his backpack of weapons. All he had for protection was a small blade tucked into his khaki combat trousers, and his fists.
A chuckle sounded through the comms link. “Didn’t want you losing motivation when you realized how far you’d have to go.”
“You’re always looking out for me,” said Heath dryly.
“And don’t you forget that the next time I ask for a share of your holo-suite credits. Got my eye on a sweet experience involving an alien predator and a canon blaster.”
“Great way to waste my credits.” Heath flashed a quick smile in the gloom. “Kade can fix you up with extra credit, if you’re running low.”
“Not for free, though,” said Jude. “He’ll only trade for coffee and chocolate. The guy loves his caffeine.”
“Almost as much as you love your alien shoot-’em-ups.”
Jude’s laughter died. “Fuck! You’ve got company. Hold your position.”
Heath did as instructed, his breathing slowing as he strained to hear. Jude might be a wiseass most of the time, but he never messed around when they hunted for fragments. There was always the chance of meeting other hunters, or encountering the creatures that had slid out of the darkness ever since the annihilation of the dragons.
“Movement one hundred yards to your left,” said Jude. “A large mass, and warm-blooded, from the heat signature.”

Author of the Vortex Warrior series and The Ember Quest, you can sign up to receive news and updates on all her book here