Veronica: Thanks for having me as a repeat guest! Always love being here…and this is the first time I’m guest blogging about my new release, THE FATED STARS, which just came out.
Liza's response: I love having you stop by.
This is the fourth story I’ve written involving a captive alien empath and the brave Sectors soldier who rescues them, but for this book, I wrote a male empath and a female bad-ass mercenary. My daughters have been challenging me to write a female soldier and I thought this book was my golden opportunity. I wanted to have the adventure be markedly different from the other three in this quasi-series I’ve got going. 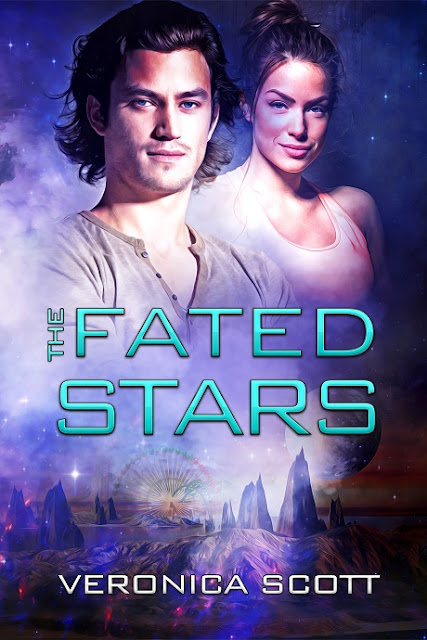 Here’s the plot:
Larissa Channer, a tough no-nonsense mercenary in the Sectors, is celebrating success on her last job and a big bonus, with no slightest thought of taking on another assignment anytime soon. Out for a night of carousing with her friends at a third rate carnival on a backwater planet, she walks into the tent of a fake fortune teller and finds herself confronting the most intriguing man she’s ever seen. But something’s wrong, ominous currents lie beneath the surface of their encounter and Larissa can’t leave well enough alone.
Samell, a powerful, high born empathic priest, has been kidnapped from his own primitive planet along with a number of his people and sold to the shady operator of an interstellar carnival. Kept enslaved, pretending to be a fortune teller while forced by his captor to steal information from the minds of all who come before him, Samell despairs of ever breaking free.
Until Larissa walks into his tent and he recognizes the warrior who might mean the difference between life and death.
The situation becomes dire when Larissa and Samell come to the attention of the Shemdylann pirates who kidnapped him in the first place and the deadly Mawreg aliens who threaten the Sectors. Can she save herself and the empathic alien noble, and derail the Mawreg plot against the Sectors? And will the soldier end up with her prince when all’s said and done?

The excerpt:
In a happy drunken cluster, she and her friends roamed the carnival grounds. They scoffed at the trained animal acts, featuring beasts supposedly imported direct from Old Terra, and the group of them threw tips in the hat for the strolling dancers and acrobats and lost credits at the rigged games of chance. The attractions were as lackluster as she’d predicted, until they reached the back of the lot.
“Ooh, a fortune teller.” Pamila wobbled in her space boots, leaning on Devlin. It was obvious to Larissa those two would be sharing a bunk in his ship before the red sun rose. “I want my future read.”
Half-baked superstitions rising in her somewhat fuddled mind, Larissa shook her head again. “Bad idea for a mercenary. I can tell you right now, our future’s uncertain as the path of a rogue comet. See, I just saved you a credit. Thank me later.” She spun on her heel to walk away as fast as she could.
Pamila grabbed her elbow. “Come on, it’ll be fun. More fun than losing credits on the bucket toss or the ring loop.”
“I doubt that.”
But she was overruled, and they each paid the minimal fee then stumbled into the darkened tent. Larissa paused on the threshold, stunned by the urge to flee. What the seven hells? Larissa Channer doesn’t back down from a real challenge, let alone a mangy fake seer. Gritting her teeth, she followed her friends.
Lavishly decorated with gaudy odds and ends, the temporary structure was meant to suggest a remnant of an ancient civilization perhaps, or accouterments of magic. Larissa had no idea. Her attention was riveted on the fortune teller himself.
He was the most compelling man she’d ever seen and undoubtedly the handsomest. Dizzy from more than the feelgoods, Larissa felt warmth spreading from her core, pulsing outward. Annoyed, she rested one hand on the nearest faux column to steady herself.
She’d seen good looking men before, even shared her bed on occasion in a no-strings attached friends-with-benefits manner, so why was she craving the sensation of his body under her hands?  Practically swooning? Which was the only applicable word here, Larissa admitted to herself. Like a fairytale princess in a trideo. If there was one thing Larissa could never be accused of, it was mimicking a fainting fictional heroine. Built on solid lines and taller than many of her fellow mercenaries, male and female, she was a well-trained, kick-ass warrior.
And she did not get her panties in a twist for random, good-looking men. Especially not members of a third rate carnival.
Drank too much of the cheap feelgoods.

Author Bio:
USA Today Best Selling Author and “SciFi Encounters” columnist for the USA Today Happy Ever After blog, Veronica Scott grew up in a house with a library as its heart. Dad loved science fiction, Mom loved ancient history and Veronica thought there needed to be more romance in everything. When she ran out of books to read, she started writing her own stories.
Seven time winner of the SFR Galaxy Award, as well as a National Excellence in Romance Fiction Award, Veronica is also the proud recipient of a NASA Exceptional Service Medal relating to her former day job, not her romances! She was honored to read the part of Star Trek Crew Member in the audiobook production of Harlan Ellison’s “City On the Edge of Forever.”
Blog: https://veronicascott.wordpress.com/
Twitter:  https://twitter.com/vscotttheauthor
Facebook:  https://www.facebook.com/pages/Veronica-Scott/177217415659637?ref=hl
Amazon Author Page:
http://www.amazon.com/Veronica-Scott/e/B006CUCJ92/ref=dp_byline_cont_ebooks_1