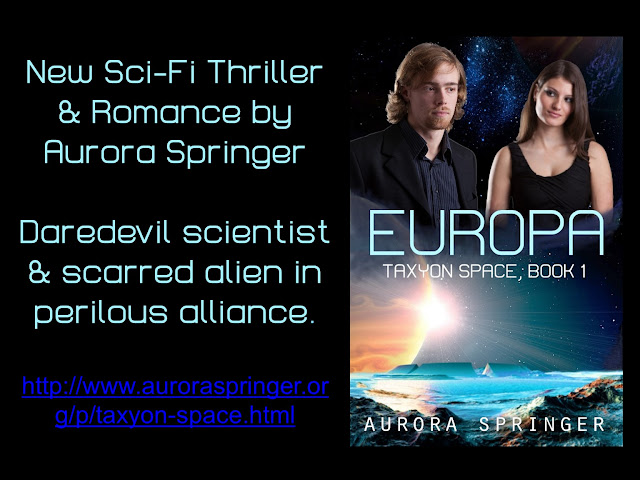 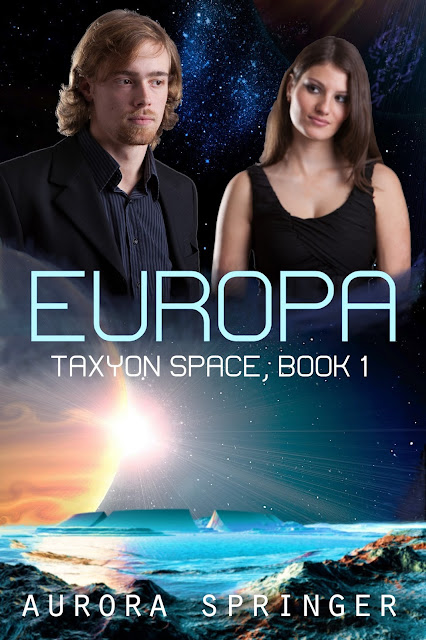 Dr. Nikki Bell’s plan to discover intelligent life hits a rocky start when her spaceship crashes on the icy surface of Europa. Seconds before she blacks out, she spies a man’s face in the water beneath the ice. When she wakes on the submarine Station, nobody believes her story. Convinced the mysterious stranger saved her life, Nikki searches for him while she explores the ocean and its alien inhabitants.

Kiron Arqin Ramis chose exile as a Watcher on a remote outpost to redeem his family’s honor. He never expected to find an attractive Earther woman close to death. He violates the prime policy by rescuing her. Despite suffering the penalty, he strives to warn her about his hostile leaders.

Nikki’s unexpected meeting with Kiron triggers a chain of disasters in Europa’s perilous oceans. Can the daredevil scientist and scarred Watcher forge a new alliance despite their people’s antagonism?

Water rippled. Giant bivalves clacked shut on all sides. A large object loomed in the darkness. A monstrous siork propelled by long fins like a winged serpent moved into the blue glow of the mollusks. Its enormous fang-filled mouth gaped three times the length of a man. Biting her lip, Nikki eased her zapper from the holster. Her hiding place seemed a fragile and inadequate protection against this monster.

The green skinned man whirled toward Nikki. Diving into the same shelter, he knocked her to the ground and dropped beside her. Jolted by the impact, she blinked at his face, faintly visible in the blue luminescence. His eyes widened a fraction, and he gave a wry smile of recognition. Pinning her down with one arm, he gripped his harpoon and stared out.

Waves surged against the giant mollusks, rocking their shelter. The blue glow faded. Above them, the monstrous beast bashed against the shells. A loud snap indicated a cracked shell. Swirls of blue-green blood spurted across their view as the siork crushed its victim.
Her heart thumping in terror, Nikki cowered next to the strange man.

Long minutes later, the roiling waves calmed as the giant predator moved away.

The man stood, gripped her elbow, and pulled Nikki onto her feet. The diagonal slits of his gills pulsed open and closed on the sides of his deep chest. His intense gaze flicked up and down, appraising her figure in a rapid glance. Settling on her face, his green eyes warmed in admiration. He smiled. The handsome smile she remembered so well.

Flushed in triumph, Nikki gave a silent laugh. She had located her mysterious rescuer, and they were grinning at each other like fools.

There is none better than Aurora Springer when it comes to creating biological creatures. Her books are always rich with unique beings, and Europa is no exception. I was fascinated with the multitude of creatures she creates for Europa.

I thoroughly enjoyed the love story between the female human (biologist) and a water alien (Watcher).

Not surprisingly, not everyone trusts the other humanoid race. The question is, will those who mistrust the other sentients destroy all chances of the two species working together. There are those on both sides who believe the other beings are a threat and should be removed.

And as always, Aurora provides exceptional detail in setting the stage and keeping the reader on the edge to see what happens next. And with her, you really don’t know until you turn the page.
I give this five stars!